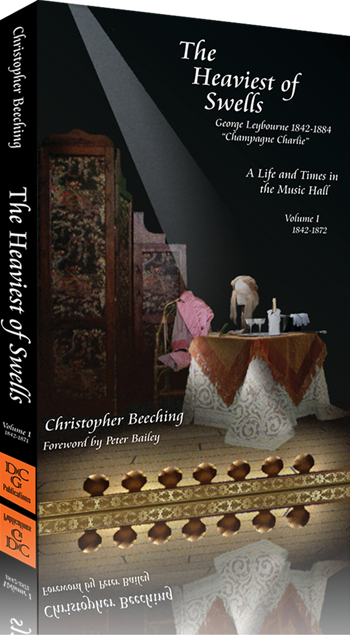 The life of British Music Hall’s first Super Star, George Leybourne [1842-1884], also known as Champagne Charlie, has always been shrouded in mystery. This book puts the record straight. Delving deeper than ever before Beeching takes a ‘detective-like’ approach and comes up with some surprising results, unlocking family secrets, as well as other revelations.

Drawing from his own theatrical career, contemporary descriptions, song cover illustrations of the 1860’s to 1880’s, he analyses Leybourne’s performance methods, conditions, as well as the deterioration in Leybourne’s health as constant touring took their toll culminating in his death at age of 42.

Written with style & humour The Heaviest of Swells shows a glimpse of life from the slums of Gateshead where Leybourne was born, to the drawing rooms of the Victorian middle classes, giving a fascinating account of Leybourne’s life as a music hall artiste, his career, and the many problems to be encountered by any music hall performer of the period.